A JTO Thanks to The Readers!

From where do the JTO Blog viewers come?

In another world..The Democratic Party removed any mention of God from their platform.
Posted by JTO Editor Nathan Lee Lewis at 1/17/2020 10:55:00 PM No comments:

No, Max, angels are not feminine as you portray in your "Christmas Movie", The Christmas Candle. In fact, the feminine angel being portrayed, who blessed one candle a year for a miracle, is closer akin to the pagan beings in cults and spiritualism.

“Many pagan religions featured winged servants of the gods (such as Hermes), and some of these were distinctly female. Some pagan goddesses had wings, too, and behaved somewhat like angels: making sudden appearances, delivering messages, fighting battles, wielding swords.”... Outside of Christianity and Judaism, pagans worshipped idols with wings and other attributes associate with biblical angels, such as the Greek goddess, Nike, who is portrayed with angel-like wings and is considered the messenger of victory."

So, Max, the movie based on your book is "Outside of Christianity".  Biblical angels are always referred to as Masculine:

Max, If you a see a being that looks like this you can be assured it is not from the God of Abraham, Isaac and Jacob. In the name of Christ, you have allowed millions who may see your movie to be opened to deception of the most dangerous kind. I bet you are friends with those in your field who also portray Mary and Joseph as teenage star-crossed lovers, when Joseph was really an aged widower and Mary a 13-year-old purified virgin who remained EVER VIRGIN.

However, congrats, Max, on being a "Best Selling Christian Author" and getting your books made into movies and stuff. 10 million dollar net worth--not bad for a former Church of Christ pastor.

"The Hallmark Channel is known for their wholesome content, especially their Christmas movies. They are predictably sweet, sappy and family friendly..."


"Hallmark Caves to Leftist Mob, Says They Will Reinstate Lesbian Commercial and Partner With GLAAD"

Romans 1:26-27: "Because of this, God gave them over to shameful lusts. Even their women exchanged natural relations for unnatural ones. In the same way the men also abandoned natural relations with women and were inflamed with lust for one another. Men committed indecent acts with other men, and received in themselves the due penalty for their perversion."

"Greater love has no one than this,

than to lay down one’s life for his friends."

This Matthew Williams is an Orthodox Priest. He became one by fraudulently lying to Bishop Hilarion about his worthiness to become a ROCOR priest. He did not disclose the fact that, while a deacon in another jurisdiction, he raped a 15-year-old-girl, his goddaughter, while she was babysitting his children. This man is not a hero. He is a villain and should be cast out of the church according to Saint Paul's admonition for such sexual predators. It doesn't matter the good deeds he has done since then or how his parishioners laud him. He is a wolf in sheep's clothing and any acts similar to his original CRIME, and there will be others, will be on YOU Bishop. You will see a second Church destroyed because of YOUR actions and inaction. The first was because you ordained Gregory Smyrni. How did that work out for you?

Bishop Hilarion! God will judge you if you do not act! Watch! Watch! The tightness of your throat and the atrophy of your loins will increase until you obey the righteousness that the Holy Spirit demands. Stop the infiltration of the sexual predators in the Church that is the LORD's, not your's, but the LORD's!
Posted by JTO Editor Nathan Lee Lewis at 10/31/2019 02:12:00 AM No comments:

"On October 4, Pope Francis observed as an Amazonian woman led a ritual in the Vatican gardens as part of a tree-planting ceremony. The woman, bedecked with a traditional feather headdress, prostrated herself before the tree and a pair of statues of naked pregnant women. The indigenous woman also shook a rattle in an apparent blessing or incantation over the group at the ceremony, who included a Franciscan friar. Some members of the group prostrated themselves or knelt during the ceremony, while the pope stood by..."

Below is a video of the righteous people cleaning the temple of the idols, a job that should have been the Pope's.

Over the last few years, Metropolitan Hilarion of ROCOR has ordained two sexual predators. Father Matthew Williams and Deacon Gregory Smyrni. These men continue to cause harm to the church while Metropolitan Hilarion "stands by". Bishop, why are your people now having to raid the ROCOR temple to cast out the idols? That is your job. This JTO editor has received calls from priests and victims because they can find no advocate. You should be their advocate! You should be the defender of the oppressed victims in ROCOR! Instead, it is the laity having to storm the temple and uproot the leaven of 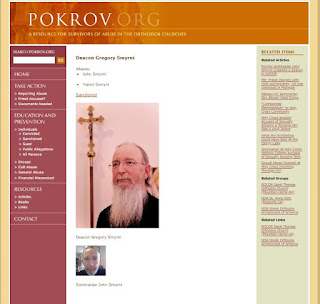 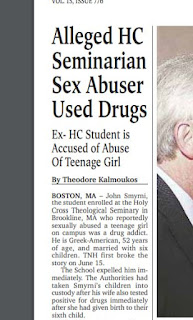 Bishop Hilarion! This leaven has leavened the whole loaf and it is leaven placed by your own hand! This action against the church is no better than that of the pagan Catholic Pope. I have to believe that you, my Bishop, Hilarion, are under the influence of unwise counsel, among whom is Father MARK ROWE who commended Gregory Smyrni to you and who has known about Father Matthew and has done nothing.  Gregory Smyrni reportedly only recently made a public confession at a WR clergy conference and has been put in a place of discipline. This, only after he was reportedly instrumental in the resignation of the founding priest of the parish where you allowed him to serve. Thanks be to God that this sexual predator who simultaneously appeared on the POKROV sexual offender site and the church orthodox website (standing next to you), no longer appears on the church website.

Cut off the sexual offenders from ROCOR as is your biblical mandate as the Bishop of the church. Censure Father Mark Rowe. Perhaps he too should make a public confession and apology?  Revise the committee who oversees sexual misconduct of ROCOR clergy. It must include laity members. Make it easier for ROCOR laity to report matters involving the local parish.


"But whoso shall offend one of these little ones which believe in me, it were better for him that a millstone were hanged about his neck, and that he were drowned in the depth of the sea."

If you do not protect the Body Of Christ then...


I have seen a few Orthodox writers brush off the subject of heliocentric vs. geocentric model of the Earth/Universe. They seem to do so with sincerity. They usually sound something like this: "The shape of the Universe does not matter, what matters is the incarnate Christ...and other more important stuff..."

They are missing it and are unwittingly a part of promulgating a satanic lie. No truth is irrelevant. All truth is given by God. Truth is truth and God is the Father of truth. Lie is lie and Satan is the father of lies.

So why is this important to humanity and the Orthodox Church, and why has a lie been perpetrated? 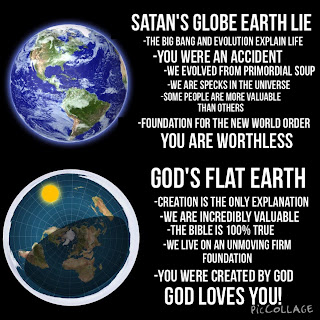 For those who would quote the writing of a specific saint who uses the word "sphere" in relation to the nature of the universe, and say, "See the saints say we live on a spinning ball", you would do well to understand the word and how it was used in the time it was written. The word "sphere" was used to encompass the universe as God created it. It never implied that the land mass itself was was wrapped around in a ball shape. The "sphere" includes all of creation including the waters above and below.

Isaiah said, "It is he that sitteth upon the circle of the earth, and the inhabitants thereof are as grasshoppers; that stretcheth out the heavens as a curtain, and spreadeth them out as a tent to dwell in.."

The Earth's land mass is a circle, not a ball. Job further describes it like this: "It is turned as clay to the seal; and they stand as a garment."

This is God's view of His creation from his vantage point, enthroned above his creation:

So, once again, why does the nature of the Earth/Universe matter to humanity and the Orthodox Christian and why should Orthodox writers refrain from brushing off this truth? Because we are Christians not Satanists. 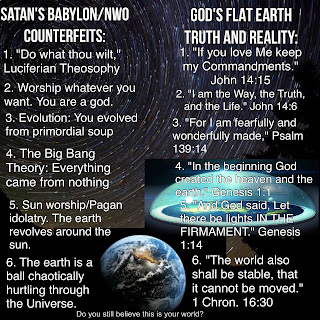 The NATURE of creation is that GOD CREATED ALL THAT IS and we are HIS creation. Is that not relevant to a world that lies in darkness? Is that not important to talk about?

Addendum: Here is your homework: 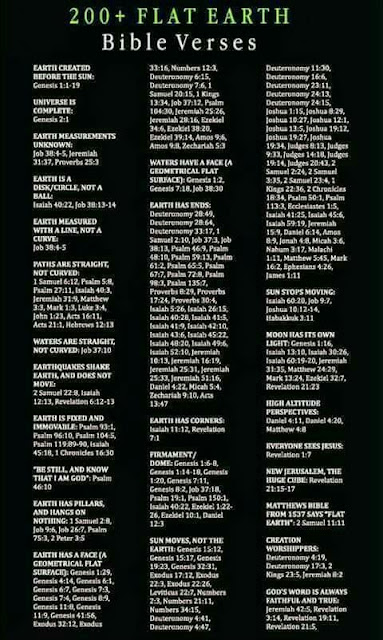 A Message To All Orthodox Bishops

If you are not informing the Church about the nature of the world in which we live, then you are not preparing them for what is to come. If you believe we live on a spinning ball and that the Earth is only one of many "planets" in a vast galaxy, rather than the fact that we live in an enclosed domed environment with a firmament above and waters below, the earth being a plane, then you are not as wise or spiritual as you think you are. Trust the scripture, not the religion of science. 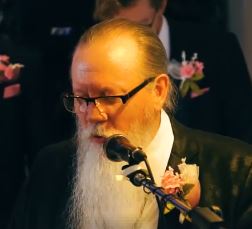 JTO Blog Editor, Nathan Lee Lewis, has a B.A. in Radio, TV, Film from the University of Arkansas at Little Rock and a B.A. in Religion/Pastoral Ministries from Ouachita Baptist University. He is an award-winning writer, having received a First Place Award for Radio Special Feature from Arkansas Associated Press and was the recipient of a Gold Addy from the American Advertising Federation given for Communication Excellence. He is a former news and talk show producer for a local CBS affiliate. He was also a licensed and ordained Southern Baptist Minister until the mid 90's when he began his interim Journey To Orthodoxy. On that journey, he served on the clergy staff of several churches and finally attended Saint Michael's Seminary (ICCEC) and served as music and worship leader at an ICCEC church. He entered the Orthodox Christian Church in 2005. Since becoming Orthodox, he has served as a Reader in the Eastern Rite and a Cantor in the Western Rite. He and his wife, Xanthia, have been married for 39 years and have five daughters and seven grandchildren. Nathan and Xanthia are a part of ROCOR under Metropolitan Hilarion. Nathan has owned and independently operated the Journey To Orthodoxy Blog since 2006.

Links To Topics Of Interest